Although the United Kingdom officially left the European Union, Brexit is not over just yet. Negotiations on future economic relationships between the UK and the EU have been long and difficult. What is at stake?

As of July 2019, Boris Johnson has been in office as Prime Minister of the United Kingdom, promising the UK to ‘get Brexit done’, three years after the UK voted to leave the European Union. Johnson’s first task was to realise a withdrawal agreement that outlines the conditions of the UK leaving the EU and that presents a solution on how to prevent a hard border between Northern Ireland and the Republic of Ireland.

Whereas Theresa May failed to accomplish an agreement due to criticism for her backstop plan because it would keep the UK in the European single market and customs union, Johnson was able to persuade UK’s Parliament with his idea of the Northern Ireland Protocol. As part of this protocol, only Northern Ireland will continue to enforce the EU’s customs rules and so maintain an open border between Northern Ireland and the Republic of Ireland. Instead, the customs border will be in the Irish Sea. 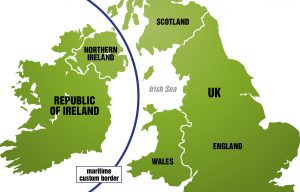 One of the main issues at hand in these trade negotiations is the so-called level playing field. Right now, the UK and the EU share the same rules and standards in areas such as workers’ rights, competition and environmental policy. These rules prevent businesses in one country to gain a competitive advantage over those operating in other countries. Both the EU and the UK have shown to be very decisive in their stance on how closely the UK should follow these rules and standards after the transition period will have passed. European Commission President Ursula von der Leyen stated that “without a level playing field on environment, labour, taxation and state aid, you cannot have the highest quality access to the world’s largest single market.” The UK, on the other hand, argues it wants more freedom and to have the right to diverge from EU rules and regulations, as this was partly what Brexit was all about for the UK.

Consequently, trade negotiations have been uneasy and while the clock is ticking the exact shapes and forms of a future trade relationship are still to be decided on. Whether or not the transition period will conclude with a trade deal, fact is that the UK will exit the EU’s inner market by the end of 2020. Many fear that the UK’s exit will take place without a deal on trade to replace current EU regulations, which is referred to as a no-deal Brexit. A no-deal Brexit would mean that the UK faces the prospect of trading with the EU under basic rules set by the World Trade Organization (WTO), making UK goods more expensive and harder to sell in the EU.

With only limited time left, major breakthroughs are needed to realise a deal. At this point, it is hard to foresee what an economic and political relationship between the UK and the EU will look like. However, evident is that on 31 December 2020 the transition period with its trade talks will come to an end, either with or without a trade deal.

Is there still time for a Brexit trade deal?

Brexit trade deal: What are the sticking points?

Brexit: What is a level playing field?

Brexit trade talks: What is the difference between a deal and a no deal?

Brexit: What is the Northern Ireland protocol and why is it needed?

How is Boris Johnson’s Brexit deal different from Theresa May’s?

Brexit: What is the transition period?

Brexit: What trade deals has the UK done so far